The knowledge of the geographic origin of maize is crucial to understand how man could domesticate the plant and then adapt its use on much of the world’s cultivated land.

According to current archeologic and genetic knowledge, we can place the domestication of corn to 9000 years ago, in the mid valley of the Rio Balsas, in the middle of the Sierra Madre del Sur, South of Mexico city. In this area we still find the wild ancestor of maize, teosinte « zea mays parviglumis » 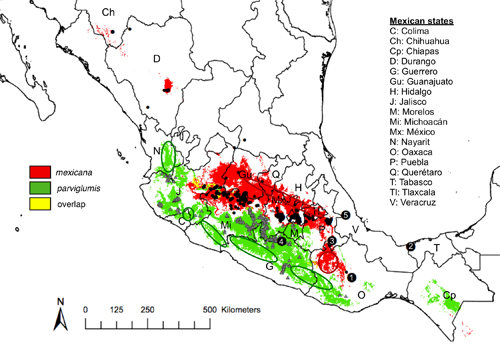 Decades of controversy about maize origin are now finished thanks to the contribution of modern genetics. ( Doebley works 1984)

The genetics of teosinte and then maize in its different expansion areas is still being resolved. America and Europe are the best understood  with the genetics in Africa and Asia now being published. These studies allow us to visualize the multiple migrations of the plant and also the way humans have used its genetic diversity to enable its adaptation as movedaround the planet.

The major facts are the very high genetic variability of teosinte (25% of this variability has been lost during domestication of maize) and above all, the original climatic conditions of the species : tropical zone, 28° North latitude, just below the tropic of cancer, climate with a wet summer and a dry winter and an annual rainfall around 1500 mm. Moderate temperatures between 10 and 32 °C during the growing period, with an altitude around 1500 m.

The major maize growing countries have a wet summer: American Corn Belt, China, Brazil, Argentina, tropical Africa, and Indonesia.Maize worldwide is mostly unirrigated. The very ancient development of maize in areas with dry summer was done thanks to irrigation technics : irrigated valleys and terrasses  of the Incas and their predecessers  Nazcas and Mochicas along the west coast of South America ; more recently, the intensive irrigation in Egypt and Southern Europe.