Corn history and breeding > Move to hybrids …. full of biodiversity

The movement from landraces to F1 hybrids of pure lines, called « hybrids »

The difference between a landrace (= open pollinated population) and a « hybrid », two types of varieties from the same species is difficult to explain to the public, because the « hybrid » word is often wrongly used and misunderstood...

A « landrace » or « populations » or open pollinated variety », in the case of an allogamic species like maize, is essentially made of hybrids, all individual plants different and the result of random matings between the genetically different plants composing the population.

What we call an « F1 hybrid » and, most of the time, simply « hybrid », is the result of the mating between  two pure lines of maize. As predicted by the first law of Mendel this F1 hybrid is homogeneous. Each plant is genetically identical regardless of the number of progenies of the orignal crossing or mating between the parent lines

As a simplification we use the term « hybrid » in the everyday language, instead of « F1 hybrid of pure lines » which is the correct denomination.

The innovation of hybrids by  Shull and East, based on Mendel’s laws, is creation by man of pure lines of maize. They are produced by manually self-pollinating plants from a population, for 5 to 8 generations, according to the level of purity expected.

Those pure lines are mated with different pure lines and the best combinations, among thousands of experimental hybrids, are used as « commercial varieties » planted by farmers.

The great advantage of F1 maize hybrids (yield doubled and resistances to stress and diseases improved) is the fact that all the plants of the variety have a uniform and very high level of heterosis (or « hybrid vigor »), while, in a « landrace » the heterosis is distributed very irregularly or randomly within the population.

In addition, each hybrid plant expresses the resistance traits fixed in the parents, while in a landrace, genetic variability allows some plants to be susceptible to diseases, stress and physiological abnormalities.

The F1 hybrid is homogeneous..... but full of biodiversity !

Despite its homogeneous aspect, an F1 hybrid is « full of biodiversity » because its two parents are very different genetically. This homogeneity is temporary and disappears in plants the next generation. 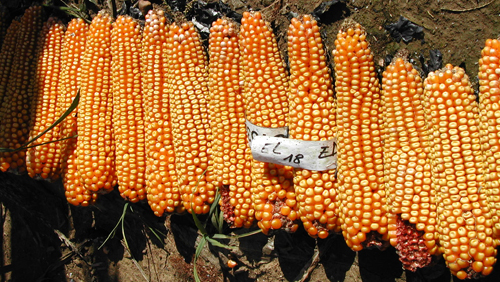 Finally,  farmers abandonned their old varieties (1950 to 1960 in Europe) because modern hybrids brought them :

The result is that maize of the current era is the less « treated » field crop (Index of frequency of treatments IFT<2). 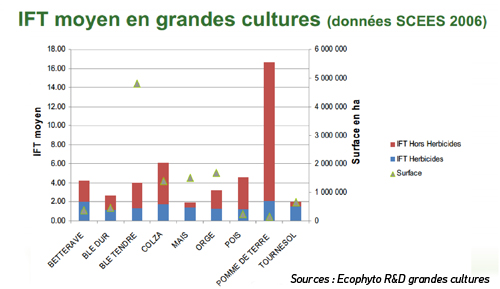